Livestreaming the Arts in Ireland During Lockdown

Introduction One of the biggest casualties of lockdown, government restrictions, and social distancing requirements has been the live performance industry (I take this to include musicians, performing writers, DJs, and theatrical performers). Two years on, we can reflect on how livestreaming in Ireland developed, and its possible future. My focus was on music livestreaming, while placing this within a wider context of all arts performers in Ireland.
My first port of call was to see what route the development of today’s all-pervasive streaming culture took…
Key Concepts Explored I found it helpful to group research into five thematic areas;
The following images present the key finding(s) in each area…

• Over 12,000 Activities cancelled – including 3,700 performances and 195 exhibitions.
• Over 112,000 tickets already sold for activities that will not now take place.
• 269 staff have lost their jobs.
• No evidence as yet that insurance cover will provide relief.
• Over €3.85million invested to date in activities now cancelled/postponed.
• Potential income of €6.4million lost from activities now cancelled.

Arts Council of Ireland Findings in Response to Survey of Arts Council Funded organisations on Impact of COVID-19. 2020. 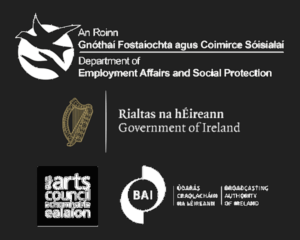 There were snapshots of data available from the Arts Council and Irish Government. I had also performed some initial investigation as part of a previous Creative Arts module, exploring the methodology and requirements for livestreaming the arts. Most of this project took the form of desk research, surveys, case study interviews and the presentation of this information in a livestream.
I determined that two separate surveys (creators/audience) would be best to investigate the Irish experience of livestreaming the arts during lockdown. I sought to both supplement the information touched on in early Arts Council artist surveys and develop an understanding of audience habit changes and sentiment. The surveys were created with some common questions, both quantitative and qualitative, and I advised in promotion that some respondents may be both creator and audience. Discarding off-topic and nonsense answers reduced the survey participation from 226-132 and 139-41 for audiences and creators respectively but delivered immediately higher quality datasets.
I focused the creator survey questions on livestreaming practicalities, such as platforms, funding, monetisation and pre-recording or liveness. Audience survey questions centred on genres, devices used to watch, free or paid streams, feelings towards streams, general media consumption changes, current interest in livestreaming and a free text entry that raised a variety of pertinent themes for exploration.
I conducted semi-structured case study interviews over Zoom. These interviews yielded some interesting personal and professional Ireland-specific insights. The interviewees were chosen to be a broad representation of the arts in Ireland. One was DIY and community-based, the next an established, funded local arts festival and the last a professional film company that became responsible for creating some of the most high-profile and polished Irish arts livestreaming of the pandemic.
Using the foundation of Practice as Research, from the outset it seemed fitting to present the results as a livestream.  The three case study interviewees were invited, along with general members of the public through the same channels as participants were recruited. The structure was a deliberately informal, accessible overview of findings with encouragement from the audience to participate or field questions and comments. In the spirit of livestreaming in Ireland during Lockdown the stream originated live from my living room, self-operated. The preparation for the Livestream forced me to condense my research and findings down to their simplest and most understandable core. One of my case study interviewees, Tracy Bruen joined live from her (parked) car as a guest and lent proceedings a bit of variety and an extra viewpoint.
Case Studies
Tracy Bruen, artist in her own right, host of Róisín Dubh Open Mic, and Galway 2020: European Capital of Culture Livefeed project (which has now found a home under Music Generation Galway, so the project continues).
Maura Ó Cróinín, chair of Galway Early Music Festival (ceol ársa na Gaillimhe). GEM runs annually in May and features concerts by top international performers, workshops, schools events and music and theatre.
Liam Harkin, Executive Producer with Tiny Ark – a team filmmaking professionals that have worked on Other Voices, Body & Soul Éirú and a CMAT video to name just a tiny fraction of their recent work.

What made Livestreams so special in Ireland specifically during the pandemic? Originating live from non-studio locations, on non-professional channels, or from somewhere audiences did not have access to, performers innovated and entertained.

Some findings differed from my expectations – no environmental concerns were raised in text entries. The jump in usage across livestreaming arts Events, subscription streaming video and podcasts tallies with reported global trends. Television, newspapers, and magazines decreased more than other traditional media, such as radio and books, however.
From the practitioner standpoint, 75% of respondents Livestreamed a performance, 15% uploaded edited videos, 3% wanted to livestreaming, but did not and only 9% said no outright.
Another key finding was the predominantly positive response to livestreaming reported in the audience survey. The more equivocal statement Livestreamed arts events made you “miss live performances” was the second most popular answer, suggesting that the positives of entertainment, access and connection were accompanied by a longing for live in-person experiences.
Breaking down the funding sources in question 7 below, 12 of the respondents provided free content only, 8 had single-source funding, 7 had multiple funders and 10 provided streams both for free and funded.
Audience members that gave positive text feedback tended to prefer live and interactive streams as opposed to pre-recorded and streamed or premiered and available on demand. Similarly, streaming live, with or without an audience was by far the favoured format for creators.
In terms of liveness, Tiny Ark’s Other Voices Livestreams were planned “with that in mind, with two-way interaction, live, with event-ness, less like pre-records, more like a gig.” (Liam Harkin). Galway Early Music Festival aimed to return the liveness and event-ness to their streams by hosting Zoom chat rooms after performances and often having performers in the stream’s YouTube chat to interact with the audience. (Maura Ó Cróinín).
While nearly 80% of creators are no longer livestreaming, more than half of those who are not are open to livestreaming again in future (see below). Liam from Tiny Ark concluded in his final thoughts that while he was happy to get back to regular filming, “livestreaming is not going to go away”, continuing:
“Other Voices and Dublin Theatre Festival continue to stream. The medium has power and potential, despite the screen fatigue. A lot of people kept going… Livestreaming got me through lockdown.”
Accessibility Considerations
One of my areas of interest prior to the commencement of data gathering was that of accessibility of livestreaming versus in-person events.
Two years before the pandemic, Emily King had investigated barriers to attendance at arts events and the highest ranked reasons were: “Time including work 47.3%, Costs too much 38.3%, Getting there including disability 36.6%, No-one to go with 21.6%, Didn’t want to go to that location 9%, Program not of interest 6.6%.” The barriers in this case were resource and accessibility-based, as opposed to disinterest.
Based on several free text responses to the audience survey, access provided by livestreaming remains paramount for some members of society. Be they carers, parents, have mobility issues, social anxiety or otherwise lacking in time or resources to attend in-person events, lockdown has given everyone a taste of what it has been like to have reduced ability to enjoy the arts on-site.
“Live streaming accesses a new audience of the excluded (disability and financially) and worldwide audiences for Irish music.” – Tracy Bruen
Co-founder of Disabled Women Ireland, Maria NíFhlatharta, in a 2021 interview with the Irish Examiner voiced her hope that the previous 16 months of widespread deprivation of in-person events might give the public “greater empathy for those who experienced that loss and inability to access the Arts long before Covid-19”.
“As a person with a disability, livestreaming has given me access to so many events I would not otherwise be able to attend, and I fervently hope that organisations recognise that and continue to offer them where possible.”
Respondents to both the creator and audience surveys reiterated this…
“Remember there is an audience who can not attend live events, it may be due to being a carer or other factors.”
“As a disabled person, many Arts performances aren’t accessible to me regardless of COVID-19. In what feels like like [sic] rush to ‘normal’, and ignoring the ongoing pandemic, my access to community and the arts is lessened again. I have in actuality, been more isolated since dropping of mitigation measures.”

Listen to the edited audio of the Livestream here...

Artists featured in the piece:

It is apparent from the case study interviews and surveys that livestreaming played an incredibly important, and predominantly positive role in Irish life during the outset of the pandemic, and government grants and supports strongly aided this, whether the content was free or not. Enthusiasm for creating and watching livestreams has waned since the return to in-person events, and there is a degree of bilateral burnout. Nevertheless, the door has been opened, particularly regarding accessibility to the arts for those that cannot attend in person.
The inventiveness, resourcefulness, tenacity, and successes of the Irish arts sector is noted, along with the negatives, such as job losses, venue closures, technical struggles, mental, motivational, and emotional strain, and the many performances that never came to be.
At the time of writing, reported cases of Covid in Ireland are in their low hundreds, but the coming academic year and winter still pose a threat of a spike in cases. We remain faced with the possibility of outbreaks, the as-yet unknown effects of Long Covid and the threat of other pandemics, such as Monkeypox. The potential need for remote living persists, for individuals isolating certainly, if not the entire country.
This project represents a timestamped, isolated gathering of audience and creator sentiment. There are many potential future avenues for research; be it from a technological, mental health, economic, cultural, environmental or accessibility standpoint. A well-resourced longitudinal study with an increased sample of participants – that will likely echo medical investigation in the coming years – could yield fascinating insights and aid deeper analysis. A dataset large enough to meaningfully map the rates of lockdown livestreaming, funding sources, remuneration and current streaming levels across individual fields of arts practice would be valuable. The number of practitioners polled was sufficient to glean basic trends, and the free text entries elicited thoughtful responses, however wider conclusions cannot be drawn in this case. The audience responses were also insightful and sincere, suggesting that Livestreamed arts had affected at least some of the respondents deeply.
These topics are still in early lifecycle, and we are even now bridging the gap between reacting and reflecting. I look forward to the body of research that this generation-defining event and its after-effects will undoubtedly prompt.

Dip into some streams...

Thanks for reading! Whose Livestream got you through lockdown? Let me know your thoughts…