The assignment asked us to create a short multimedia work of 3 mins where we were asked to consider production and scene design, lighting and formal aspects of composition.
Key to this project is investigation into motion graphics, animation, multi channel and composites lighting, framing the use of computer-generated imagery, props, devices and backgrounds.
The aim of this project is to build a visually exciting and engaging piece that can occupy a number of different contexts, for example projections for live performance or animations that function as moving paintings or sculptures.

Car parks were everywhere in the films and TV of my youth, it’s only after I filmed that I realised just how much of my formative watching had scenes set in car parks. Cheap to rent, plentiful in urban filming locations, atmospheric, architectural, structural, creepy, moody, sometimes futuristic. They hint to clandestine meetings, car chases and danger (especially for women). They come loaded with unease when shot at night, perfect for science fiction, horror and thrillers.
Location: the underground car park in my apartment building. I don’t own a car, so car parks are still a bit exotic to me. My father was a builder and I grew up on building sites; I love concrete.

But now, there’s a tussle as urban space is debated over. Is the city for people or cars? There are examples around the world of car parks being reclaimed as cultural spaces. I have an antipathy to cars (safety, environmental, spatial, human interaction concerns) and enjoy seeing these buildings taken away from vehicles. I would love to either re-stage the set in the car park for longer, or project the film looped onto the space where it was filmed. 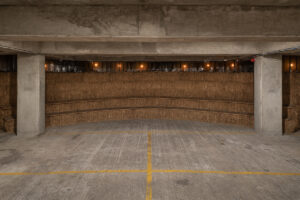 The props are all relatively timeless or vintage. I wanted to give the feeling that it could be any point over the last 60 years. The armchair next to the couch gives you the feeling of a psychotherapists office. It remains empty, so the subject on the couch isn’t analysed by anyone on screen, but instead, me as the film-maker, interpreting what dreams he might be having and the viewer too as they watch. The chair in particular is from my family home, one that my father used to sit in in our old house in the 80s.

I wanted to create textures, depth, planes, angles, interesting shadows and a scene that ultimately was arranged in composed, painterly way.

I used a tripod, as the light in the car park was dim, and the shot would need to be as static as possible. I took a slightly lower angle, as I thought that made it more intimate than an elevated observational position.

On the day of filming, the power supply was off, so I supplemented the overhead lights in the car park with anything battery-powered I could find in my house. I was very lucky to have had two of the below soft LED lights to replace my planned rope light for back-lighting the couch – I wanted to do this to give a sense of depth, show off the texture of the wall, and bring the couch to the fore. The box light, which I had there for a geometric element, light source, white space and space-y element was lit by a string light and some glow sticks. I also tucked two glow sticks into the subject’s jacket to give his face an extra highlight. At the end, the dozing subject rolls over, turning his back to the camera and disappears into the darkness of the couch. All you can see are his feet. The bare feet make him seem more vulnerable.

I had a friend drive his car around and cast light on the scene – there are subtle red elements at points – this put me in mind of sunsets, sunrises, warmth, horror and danger simultaneously. I had planned a red or orange colour-wash, but decided against this as it would have taken from the staging of the scene and muddied the lines and contrast. 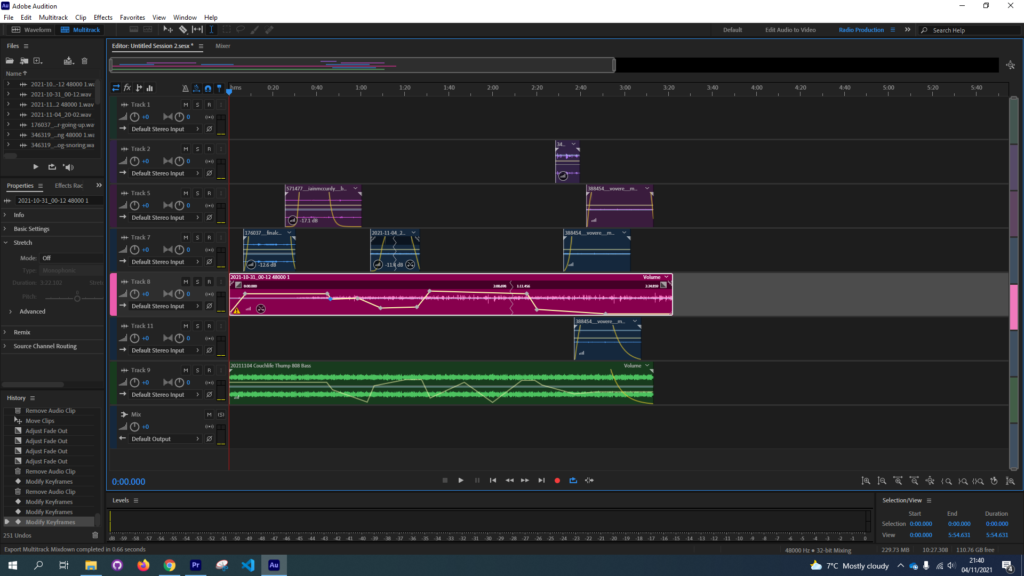 I asked my housemate (the subject) about what his most common dreams were – the majority were stress dreams, but occasionally peppered with more light-hearted ones. I made a baseline track, to represent the thrumming of the subject’s heart, vessels and brain activity. The same baseline was transposed into different virtual instruments to show changes in dream mood. I don’t play a musical instrument, so I sequenced to the best of my current ability to achieve the mood I wanted.

(Thanks to Patrick O’Malley for putting on his best suit and lying in a November garage, and to Eoghan Holland for helping to move the furniture and the use of his car headlights.